And for every coin set sold a donation goes directly to GOSH Charity to help support the hospital and the seriously ill children from across the UK who are cared for there.

So, join me in today’s video where I unbox this magical Silver Proof 50p set and reveal what you can find inside of the deluxe presentation box.

Be warned though, this set is now OVER 80% SOLD and when you consider that alongside the fact that last years full edition limit SOLD OUT,  this is definitely a video you can’t afford to miss…

As you may know, this year we’re celebrating a numismatic milestone: the 50th anniversary of the 50p!

And as the collector’s favourite 7-sided coin turns 50 years old we’ve seen many commemoratives marking the occasion, which have proved immensely popular with collectors.

And a brand new UK 50p has been released today by The Royal Mint to mark the actual anniversary of the 50p – 14th October 2019.

This new coin is sure to see an overwhelming response from collectors. That’s because the new coin has THREE unique features that alone make this commemorative this year’s must have 50p release…

The reverse features Christopher Ironside’s iconic Britannia design, inscribed with ‘New Pence’. This was the first design to ever feature on the 7-sided 50p, released in 1969.

But what truly sets this issue apart from all other 50years of the 50p commemoratives is the inclusion of THREE special hidden features:

These three features make this issue highly collectable and will surely be sought-after by collectors in years to come.

To give as many collectors as possible the chance to own this coin, The Royal Mint has issued it in Brilliant Uncirculated quality, which is coveted by collectors as it means each coin is free from any marks you would find on circulated coins.

Each one is protectively encapsulated in its attractive original Royal Mint packaging to preserve its quality for generations to come. What’s more, you can secure this BU Pack at the Royal Mint issue price of just £10 (+p&p). Click here to find out more >>>

However, you can own the special commemorative 50p in an even more exclusive way – so exclusive just 3,500 collectors worldwide can own it.

This version is sure to sell incredibly quickly. Remember when The Royal Mint re-issued for 2019 some of the most iconic 50ps, to celebrate the anniversary, in Silver Proof quality the popularity was unprecedented. In fact the full allocation of 3,500 COMPLETELY SOLD OUT within two hours.

That’s the same edition limit as this single coin.

The coin has the same design, but comes presented in a bespoke Royal Mint presentation box and is struck in superior .925 Sterling Silver to a perfect proof finish. Given how popular commemorative 50ps are, this exclusive precious metal version is sure to be an even bigger hit.

You can secure this limited edition coin for your collection now for just £55 (+p&p) – that’s the Royal Mint issue price. Click here to find out more >>>

But, there is an even more limited way to own this coin – as a Silver Proof Piedfort. Limited to just 1,969 collectors across the globe, this coin is nearly twice as rare as the regular Silver Proof version.

Piedforts are the pinnacle of Royal Mint craftsmanship. They are highly-sought after amongst collectors and stand out for many reasons:

What’s more, 50p Piedforts are extremely rare. To my knowledge only about 20 or so have ever been minted and as such are always highly sought-after.

In fact, they are so in demand that the 2019 UK Stephen Hawking 50p Silver Proof Piedfort, with a higher edition limit of 2,500, COMPLETELY SOLD OUT at The Royal Mint within two hours.

You can secure this limited edition coin for your collection now for just £19 (+p&p), followed by 4 further equal interest-free instalments. Click here to find out more >>> 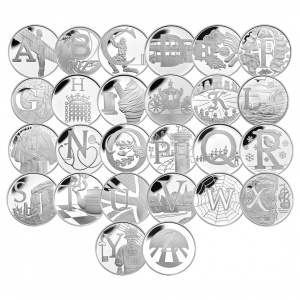