Whether you love them or hate them, it’s fair to say that when the Bank of England issued the very first polymer banknotes, UK currency was revolutionised. As well as refreshing the designs of the notes, these polymer versions were considered a cleaner, safer and stronger alternative.

In 2016 it was the £5 that received the first makeover, and Winston Churchill was selected to feature on the note. Jane Austen soon followed on the £10 note and now, as chosen by the British public, renowned artist JMW Turner graces the new £20 polymer note.

But it’s not only the design that makes this note special. You see, the Bank of England have described this note as the most secure banknote yet. So, I’m of course curious to see what special security features have been worked into the design of our newest banknote…

Before the revolutionary polymer £20 came along, there were over 2 billion £20 paper notes in circulation. The sheer volume of them made the £20 note Britain’s most used, and consequently most forged, banknote.

So it’s understandable that the need to make it difficult to counterfeit was at the forefront of the designer’s mind! The result? A whole host of special features that make it harder to forge and stand out from other notes in circulation.

Let’s take a closer look at some of the security features incorporated into the design:

When choosing the design for the £20 note, the Bank of England were spoilt for choice. They received over 29,000 nominations submitted by the general public. And the choice to select JMW Turner makes him the first British artist to ever feature on a UK banknote.

The note itself features Turner’s 1799 self-portrait, which is currently housed in the Tate Modern in London. And behind this you’ll notice one of his most recognisable works – The Fighting Temeraire. This famous painting is a tribute to the ship that played a pivotal role in in Nelson’s victory at the Battle of Trafalgar in 1805.

The final nod to Turner in the design comes from the quote “light is therefore colour”, alongside the signature taken from his will. The quote is taken from a lecture Turner gave in 1818 and is a reference to his innovative use of light, shade, colour and tone.

What do you think about the new £20 Polymer note? Let us know in the comments!

If you’re looking for a way to own this significant, revolutionary piece of British currency, then look no further than the UK 2020 £20 Polymer Banknote DateStamp™ issue. Each DateStamp™ issue has been postmarked by Royal Mail with the note’s first day of release – 20th February 2020 – forever ensuring its provenance.

First issues are always valued by collectors and by owning the DateStamp™ issue you will be one of just 2,500 collectors able to forever mark the date the new £20 polymer banknote entered circulation. We have a limited number available, so click here to find out more >>

In 2007 a new-style £20 note was introduced, featuring one of the father’s of modern economics, Adam Smith. New security features were added, including a holographic strip, enhanced watermark and ultra-violet features.

However, almost 10 years later The Bank of England has announced an update to the note, with a new design scheduled for 2020.

For the first time ever, The Bank of England asked the British public to nominate people of ‘historical significance‘ from a list of 590 eligible candidates. The candidates, from the world of visual arts, included  Alfred Hitchcock, Isambard Kingdom Brunel, Richard Attenborough, Beatrix Potter and William Blake to name just a few.

The final decision was made by the Bank’s governor, Mark Carney, and it has now been revealed that a self-portrait of Joseph Mallord William Turner  will replace famous economist and philosopher Adam Smith on the new banknote.

Also featured alongside the self-portrait will be ‘The Fighting Temeraire‘ which was painted by Turner in 1839 and is currently on display in the National Gallery.

Turner’s selection represents the first time that the Bank of England has turned to the British public to assist in the selection process. However, it isn’t just the design that’s changing, the note itself will become the third banknote to be made from Polymer – which are more secure, cleaner, durable and environmentally friendly compared to the existing paper notes.

You won’t have to wait until 2020 to see your first polymer UK banknote though, with the new polymer £5 note, featuring Winston Churchill, due to enter circulation September 2016.

Own Britain’s most famous banknote – issued in fine silver. 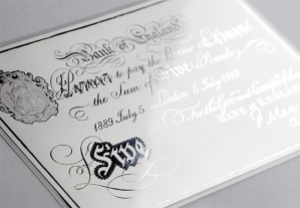 British banknotes have undergone many changes since their initial introduction in 1697, from the printing techniques and watermarks to the introduction of colour in 1957.

We have a small stock of Britain’s most famous banknote – the ‘White Fiver’ available, which has been issued in Fine Silver.

You can add one to your collection today.