Well, the key to working out if you have one in your change involves Jane Austen, Harry Kane and micro-engraver artist Graham Short.

Have you found one of the £5 notes, or do you know someone who has? Let us know in the comments below!

On 13 September, the Bank of England will issue a new £5.  It will be the first-ever polymer (or “plastic”) banknote that they have issued.

But is it the UK’s first? 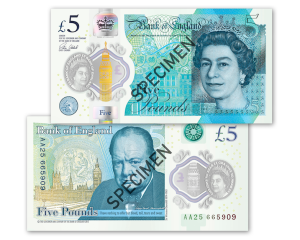 Well it is certainly not the first polymer banknote issued in the UK.

But it was Northern Ireland that beat everyone else to it with a commemorative polymer banknote in 1999 issued to mark the millennium.

The murky question of legal tender 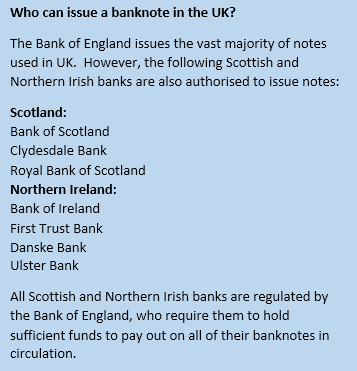 So this might surprise you.  No Scottish or Northern Irish banknotes are legal tender.

Bank of England banknotes are – but only in England and Wales.

But don’t panic – if you live in Scotland or Northern Ireland – your money’s not worthless!  Legal tender does not mean quite what you think.  It has a very narrow technical definition which relates to your ability to pay a debt into a court.

In fact all Scottish and Northern Irish notes are considered “legal currency” across the whole of the UK.  But that does not mean that they have to be accepted and it’s not unusual for English or Welsh shop owners to be reluctant to accept non-Bank of England notes.

So where does this all leave us?

The Northern Irish and Scottish polymer banknotes clearly beat the new fiver.  But they were special commemorative issues with limited circulation and little recognition outside of their issuing nation.

The new polymer £5 note is certainly the first “legal tender” note issued in the UK but that’s not as important as it first seems.

It is, however, the first polymer banknote issued for ongoing circulation (rather than as a commemorative issue) which is generally accepted across the whole of the United Kingdom.

This is the VERY FIRST time that a DateStamp™ banknote has been released.

It wasn’t until 1793 that the first five pound note came into existence. The £5 denomination, known as the ‘white fiver’ lasted with relatively few changes until 1956 when it was last issued and replaced a year later with a new blue five pound note.

Of course, there have been numerous changes to the £5 banknote since then, from different designs, sizes, colourings and security features.

In 1970 a new series of notes were designed, each featuring an historical figure on the back. Portraits and highly detailed machine engraving blended into historical scenes making the new notes more difficult to copy. 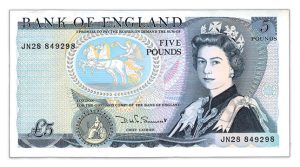 But perhaps the biggest change of all is yet to come…

On 13th September 2016 a brand new banknote will enter circulation featuring the portrait of much-loved Prime Minster, Sir Winston Churchill . However, this new fiver is unlike any we have ever seen before – it’s printed on polymer.

Polymer notes are made from a flexible plastic, which is resistant to dirt and moisture, which means they will last longer and are better for the environment.

The new note has a number of security features including a see-through window and foil Elizabeth Tower – which is gold on the front and silver on the back.  It also features multiple holograms and micro-lettering under the Queen’s portrait – which can only be viewed under a microscope.

You have until May 2017 to spend your current £5 notes, after that they will cease to be legal tender – but will still be exchangeable at the Bank of England.

What do you think about the new era of plastic banknotes? Let us know in the comments below.

You can own Britain’s most famous banknote… in silver!

In a remarkable feat of craftmanship the White Fiver banknote has been re-isued in fine silver – and you can add one to your collection today.