The birth of the Royal Air Force (RAF) in 1918 was the first time there had been a separate and independent air force established in any country.

It soon became among the most dominant air forces globally.

The 1930’s saw public interest in aircraft increase dramatically and following World War Two (WWII), the demand for the number of aircraft to be built grew quickly in a very short space of time.

Throughout its life, the RAF has monitored the advances in aircraft for military use, and today displays some of the greatest developments in aircraft technology.

For nearly a decade we’ve worked in partnership with the RAF. In that time, we’ve preserved and celebrated over 100 years of history on official commemorative releases.

Let me tell you about 4 aircraft monumental during their existence.

This Biplane fighter had only one seat and was given the nickname Camel after one squadron commented on its hump like appearance. A comment that would influence its official name.

Carelessness would get you killed in this aircraft.

Pilots had to be skilled to fly it, attentive and observant.

The Camel thrived in daylight but also succeeded at night.

The King of the Air Fighters.

The Lancaster proved vital towards the end of WWII for Bomber Command. The aircraft helped Britain successfully undermine Nazi Germany from the air.

Lancaster crews risked their lives every time they took to the air in these bombers.

On average they carried out 21 missions before they were lost.

A vision of the future.

This is how the RAF describe this 21st century Eurofighter Typhoon.

Did you know this aircraft can travel two times faster than the speed of sound? It uses cutting edge technology and has many advanced features.

The UK, Germany, and Italy all worked collaboratively on this aircraft, as they have done also with the tornado project for over several decades.

The Spitfire is by far the most famous British fighter aircraft in history. It was designed by Reginald J Mitchell for the Second World War and there are many reasons why pilots fell in love with it.

It was a symbol of freedom.

The early Mark II could reach speeds of up to 360 mph.

The Spitfires sleek lines and elliptical shaped wings make it perhaps the most graceful fighter ever created.

Did you know that Mitchell’s first attempt to answer the British Air Ministry’s call for an all-metal land-based fighter aircraft was rejected?

It had a cooling system issue.

So, his team tried again.

And boy, did they triumph.

The new design had retractable landing gear, an enclosed cockpit and of course, the thin wing shape.

After the first flight of the prototype in 1936 only a few changes were made and by early June, the Air Ministry had ordered 310 Spitfires. By the outbreak of the Second World War, 306 Spitfires were in service with the RAF, along with 71 waiting and 2,000 in the pipeline.

The aircraft I have spoken about are intricately illustrated on our collection of commemoratives celebrating the History of the RAF.

The first one in the collection I hear you ask.

Well of course it must be the Spitfire.

Bill Dady, the renowned aviation artist, has designed this one.

This year marks the centenary of the Royal Air Force, arguably the most important military anniversary to be celebrated in British history. In fact, there are numerous official events and ceremonies planned up and down the country to mark the occasion – including a service at Westminster Abbey with an RAF parade and flypast!

It has been a glorious 100 years, full of extreme courage, bravery and self-sacrifice by the men and women who served and continue to serve. 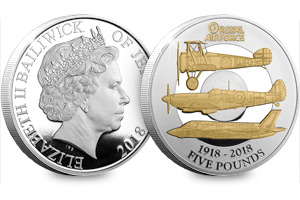 And, to mark this historic occasion, a brand new Official RAF Centenary Five Pound Proof Coin has just been issued on behalf of the Bailiwick of Jersey. In my opinion, it is one of the most striking military coins ever issued and is the perfect tribute to ensure the remarkable feats of technology and courage of our RAF are never forgotten.

So what’s the story behind the design? 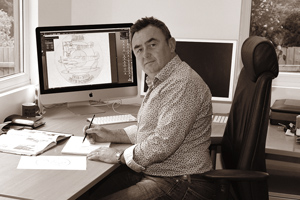 For such an important anniversary, we knew the design had to be particularly special and we felt there was no better person for the job than ex-Royal Mint designer, Mike Guilfoyle.

Mike has 30 years of experience designing coins that have circulated around the world and has produced some of the most stunning British Isles coins ever minted. We were lucky enough to see the design process through with him.

From the start it was clear we wanted to include the most renowned planes from the RAF’s history and Mike came up with multiple options for us.

However, it was the idea to show the incredible changes in technology over the last 100 years that really captured our imagination. The coin features three of the most important aircraft from the last century; the Sopwith Camel, the Supermarine Spitfire and the Lockheed Lightning II which brings us right up to the present day and looks towards the future of our RAF.

Through careful research and communicating closely with the MOD, Mike has been able to render each plane in exquisite detail. 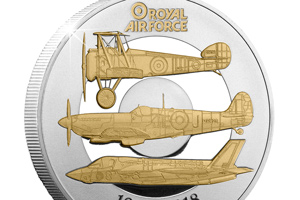 But this high level of detail and care didn’t just stop at design level. You can clearly see it’s been replicated right through to the striking of Mike’s design on the coins – what really took me aback is that none of the detail has been lost – that’s because the use of Modern Minting techniques used to produce the coins has resulted in one of the most intricately struck coins I’ve ever seen.

What makes it even better is that each plane has been enhanced with 24-Carat Gold Ink to really show off the detail and make it stand out against the Proof background.

The most iconic aircraft of the RAF

Here’s a bit more about why these three special planes have been chosen to feature on the coin: 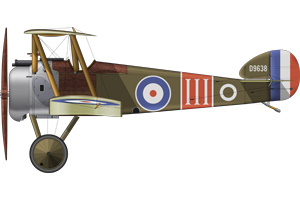 The Sopwith Camel has become one of the most iconic fighter aircraft of the First World War.

In fact, J. M. Bruce tells us that “The total number of enemy aircraft shot down by Camels was 1,294, a greater number than were defeated by any other single type of aeroplane of the 1914-18 war”[1]

With that astonishing achievement this aircraft continued to serve until 1923 – an incredible lifespan for a plane in this era. [2]

Considering that the Sopwith Camel was serving from the very beginning of the RAF’s official formation and it was such an important part of the First World War, its place in RAF history is well-secured and was a clear choice to be featured on this stunning coin. 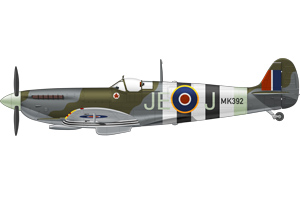 The Spitfire has to be one of the most famous British fighter aircraft in history and it has become the most iconic aircraft of the Second World War.

With that in mind, and considering the Spitfire still astonishes the crowds at air shows today, featuring this plane was another unanimous decision. 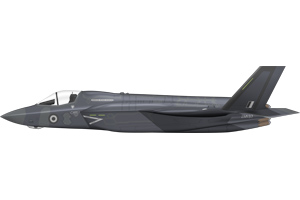 Now, this multi-role supersonic stealth aircraft is an incredible example of just how far technology has come and is definitely a plane which will play a key part in the RAF’s future.

In fact, 2018 sees the 617Squadron, becoming the first RAF Squadron equipped with the Lightning II aircraft, of which the UK has so far taken delivery of 9. [4]

To me, these three incredible aircraft represent an ever-evolving RAF that is consistently at the forefront of technology, making this coin a fitting tribute to the courageous work of the RAF, the men and women who have served over the last 100 years and those who will continue to serve in the future. 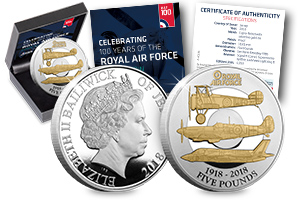 You can be one of a limited number of collectors to own the Official RAF Centenary Five Pound Proof Coin.

The three iconic aircraft have been highlighted in 24-carat gold ink and this stunning coin has been struck to the highest Proof standard you can find on a collectable coin.