In just a few weeks’ time something remarkable happens.  Her Majesty the Queen and HRH Prince Philip celebrate 70 years of marriage – their Platinum Wedding Anniversary

4 of the 8 Platinum Wedding 50p Coins

That’s because only around 30 couples in the whole of the UK ever reach that milestone each year.  Or to put it another way – the Queen and Prince Philip are literally one in a million.

Most importantly, these coins have been authorised by the Isle of Man Treasury, have full legal status AND a very limited number will enter circulation in the Isle of Man.

The 50p coin has rapidly become the UK’s most collectable coin spurred on by the release of the Olympic 50p coins and, more recently, the incredible demand for the UK’s Beatrix Potter coins. 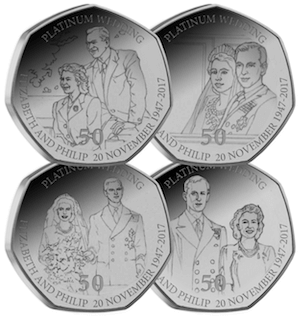 And that’s why these issues are so important.

British Isles 50p coins like this rarely turn up in your change in the UK, making them some of the most sought-after circulating coins around.

As the first major Royal wedding anniversary to feature on any British Isles standard specification 50p coins, this is a very significant moment.

A moment that’s made even more important due to the incredible milestone 70 years of marriage represents.

The first of the eight Platinum Wedding 50p coins can be yours for just £3.99.

How you can own the new coins…

On the 20th November, Her Majesty Queen Elizabeth II and HRH the Duke of Edinburgh will celebrate their Platinum Wedding Anniversary – that’s an incredible 70 years of marriage and a first in British royal history.

In honour of the occasion a new coin has been issued – featuring a specially commissioned one-year-only double portrait.

The coin has been officially approved by both Her Majesty the Queen and Prince Philip, and proudly displays their initials surrounded by a design inspired by the North Rose Window of Westminster Abbey – where their wedding took place in 1947.

But it is the new double portrait that will turn heads and have collectors rushing to secure theirs. Designed by renowned sculptor Luigi Badia, it features both The Queen and The Duke of Edinburgh and will only ever be seen on Platinum Wedding Anniversary Coins.

It’s not very often that one-year-only portraits are released, not to mention a double portrait. They really are only issued for the most important Royal anniversaries.

As you’ll appreciate, designing a new effigy is not a simple process, with an extremely rigorous approval procedure.

That’s why special portraits such as this are few and far between and are so popular with collectors.

Luigi, from New York, explains the concept behind the design:

“I was extremely honored to be commissioned to sculpt a brand new portrait to celebrate Her Majesty The Queen’s and HRH The Duke of Edinburgh’s 70th wedding anniversary.  I was inspired to use a contemporary image of the royal couple to capture both their achievement of reaching such a milestone and to reflect on the long life they have shared together.”

The design is intricately engraved onto the die

Careful consideration has to be put into the shape and size of the coin. Luigi painstakingly hand-engraved the design – with the added complication of retaining the typesetting within the circular shape.

The finalised ‘plaster’ engraving is then ready to be reduced down into a die (shown opposite) – which is hardened and used to mint the commemorative coins collectors can own.

Struck to a variety of specifications…

The new coin is to be struck in a range of different specifications, from a face value version right up to a staggering 10oz platinum edition – which has already sold out.

And the other coins are likely to prove just as popular – with a highly collectable proof coin, a pure silver coin, and a 5oz gold coin amongst those available, there is something to suit everyone.

These coins really do make a fitting tribute to Her Majesty and Prince Philip’s 70 years of marriage, and the stunning double portrait marks them out as truly prestigious commemoratives to forever remember this once-in-a-lifetime celebration.

You can mark the occasion by adding the Platinum Wedding Anniversary Proof £5 Coin to your collection today. It’s limited to just 4,950 worldwide and a sell-out is expected, especially as it features the new one-year-only double portrait.

Today, we had the honour of meeting all 9 Red Arrows pilots at the Bournemouth Air Festival to present them with a very special gift… 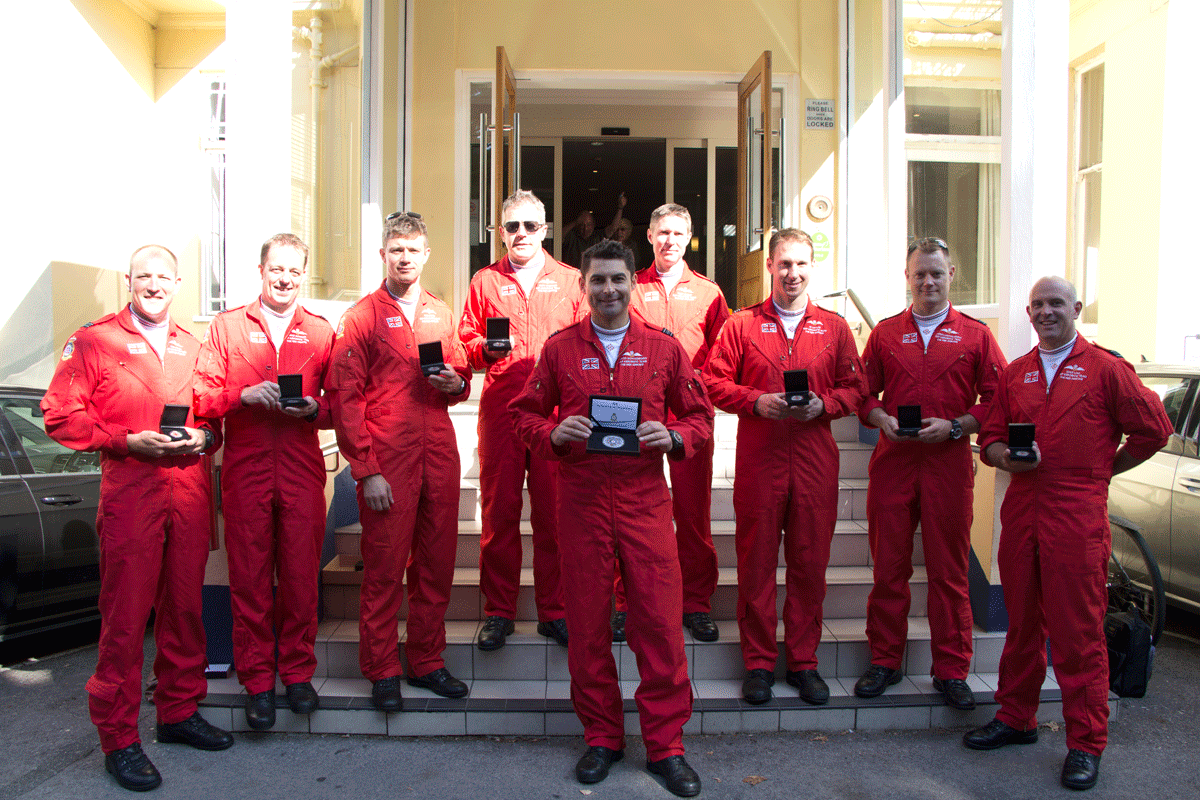 Karen & Alex had the pleasure of personally presenting them with a 5oz of Pure Silver commemorative medal featuring each of their 9 signatures carefully engraved onto it.

Officially licensed and approved by the Royal Air Force and the team who helped us create this superb piece, just 450 have been issued worldwide and we reserved issue number 1 of 450 of these pieces to present to them today (and, so they didn’t have to share, we also presented them with a Red Arrows 2017 Display Season Medal each).

Each signature  on the 5oz Silver Medal is meticulously engraved above their team number. Then to complete the piece, each member’s iconic Hawk jet with the RAF roundel at the centre is highlighted in vivid colour, surrounded by an altimeter inspired pattern – the most fitting piece to present to the Reds today. (Details below on how you can own one.) 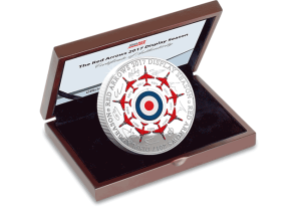 You have the opportunity to own the official Red Arrows Signature 5oz Silver Medal. This is a rare chance to own an item so closely and personally linked to the Red Arrows themselves and we only have a few remaining so you’ll have to act quickly to secure yours.  Click here for more information and to order yours now  >>