On Friday 10th October the new ‘100 Poppies’ coin was released, and the distinctive design has been turning heads.

Commemorative coins have been issued in support of the Royal British Legion since 2008, some of them even struck in the famous poppy shape.  But this year’s coin is a little different.

As 2014 marks the centenary of the outbreak of the First World War, digital artist Chris Lloyd wanted to subtly allude to the poignancy of the occasion.  He came up with countless designs, but nothing quite captured the moment in the way he wanted. 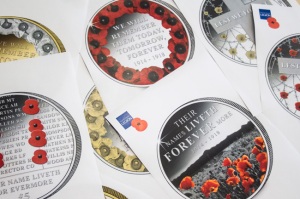 I asked Chris what gave him the inspiration to produce such a memorable coin after struggling for so long:

“It was only when I thought back to that moving part of the Royal British Legion’s Festival of Remembrance, when hundreds of poppies fall from the ceiling, that inspiration struck.  I decided that the best way to represent the centenary anniversary would be with 100 poppies, one for each year.  I even counted them by hand, marking each one, to make sure the right number are there!”

The only text on the obverse of the coin – ‘Lest we forget’ – taken from Laurence Binyon’s For the Fallen – serves as a starkly poignant reminder.

A coin for everyone, proof, silver and gold

The new coins are being made available in a range of metals, to suit any collection.  From a Proof condition £5 coin, right up an impressive 22 Carat Gold edition, all of the limited edition coins are available now.

A donation is made from the sale of each coin to the Royal British Legion.  So those who secure their coins will know they own an important piece of history, and they’re helping the Legion provide financial, social and emotional support to all who have served and are currently serving in the British Armed Forces and their families.

Get your coin in time for Remembrance Day