With the festive season underway, Christmas-themed coins and medals are proving popular with collectors again this year. 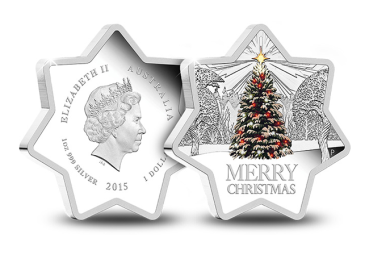 This Australian festive star-shaped Christmas coin features a beautiful full-colour image of a snow-covered Christmas tree. But what makes it even more special is the hole in the capsule, which allows a ribbon to be tied transforming the coin into a Christmas tree ornament.

Struck from .999 silver in an innovative star-shaped design, this coin would be the highlight of any tree!

The only ‘official’ Christmas coin:

This coin, featuring a gold-plated Rudolph, can lay claim to being the world’s only ‘official’ Christmas coin.  Why?  Because it is issued on behalf of ‘Christmas Island’ – a tiny Pacific atoll that is part of Kiribati.

Each year, Christmas Island releases a new edition of this silver crown coin, and they have become some of the most sought after festive coins issued worldwide. After all, you can’t get more authentic than a Christmas coin from Christmas Island!

The fastest-selling and most collectible coins in the world: 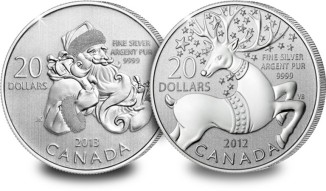 The Royal Canadian Mint Silver $20 Coins have become a collecting phenomenon. First issued in 2011 they became some of the fastest-selling, most collectible coins of all time.

Both of these coins have sold out in Canada and it’s unlikely to be long until they sell out in the UK too. 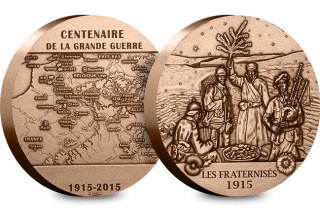 The French Mint, La Monnaie de Paris, have issued a medal to pay tribute to the soldiers of the First World War.

The artistic masterpiece features a design that represents the Christmas Truce – showing a scene of rare peace and goodwill between enemy soldiers in the trenches.

The Christmas Truce was a series of widespread but unofficial ceasefires along the Western Front around Christmas 1914. In the week leading up to the holiday, German and British soldiers crossed trenches to exchange seasonal greetings and talk.

Roughly 100,000 British and German troops were involved in the unofficial cessations of hostility along the Western Front.

The Snowman and the Snowdog:

Everyone is familiar with the magical Christmas story of The Snowman and The Snowdog. Last year, the Isle of Man issued a crown-sized coin featuring the loveable characters from the 2012 sequel film to Raymond Briggs classic story.

If you fancy adding a Christmas coin to your collection, or perhaps as a gift, we have just 24 star-shaped Christmas Coins available.