One Battle.  One million casualties.

Nothing represents the suffering of World War I more than the Battle of the Somme, which sees its 100th anniversary on 1st July.

It’s appropriate, therefore, that the new Guernsey £5 coin, officially distributed by The Westminster Collection has been issued in support of The Royal British Legion. 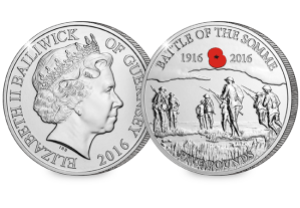 The Battle of the Somme £5 Coin

The Legion was founded in 1921 to bring together the four national ex-servicemen’s charities established after the Great War.  Today the charity still works tirelessly to provide financial, social and emotional support to all who have served and are currently serving in the British Armed Forces and their families.

And, over the last 6 years commemorative coins have helped to support The Legion’s work, with donations arising from their sales, totally over £500,000.

By owning the Battle of the Somme £5 Coin in support of The Royal British Legion, not only are you ensuring that future generation never forget the sacrifices of the Somme and the other World War One battle, but you are also helping support today’s current and ex-servicemen and their families.

Louise Ajdukiewicz, Head of Corporate Partnerships at The Royal British Legion, says: “These funds make a real difference to the charity and help us continue our vital services supporting the whole Armed Forces community.”

Of course, owning the Battle of the Somme £5 Coin is just a small way that you can help support The Royal British Legion.  For more information on how you can support The Legion, please click here.