Each year, The Royal Mint marks important British anniversaries, events or accomplishments on our coins and today we are pleased to reveal UK’s new coin designs for 2017.

Scroll down and I’m sure you’ll agree 2017 is set to be another significant year for coin collectors, with some exceptional designs that are sure to look resplendent when struck to the ‘collector’s favourite’ Proof finish…

This 50p coin has been issued to mark the outstanding achievements of Sir Isaac Newton and has been designed by Aaron West.

The 50p coin commemorates the revolutionary scientific and mathematical genius, Sir Isaac Newton and his remarkable legacy. He discovered the laws of gravity and motion and remains one of the most famous men in history. This coin really needs to be seen in real life as the concentric design cleverly catches the light differently from every angle.

2017 sees the 200th anniversary of Jane Austen’s death – and this £2 has been specially designed to commemorate one of the most famous authors of all time. Featuring an unusual ‘cameo’ design and Austen’s signature, this coin is sure to be highly sought-after.

The latest in The Royal Mint’s series of two pound coins commemorating World War I, this particular issue pays tribute to the role of the air force in the conflict. Designed by tangerine the striking aerial perspective is a first for a UK £2 coin.

The House of Windsor £5 Coin

100 years of Royal tradition are honoured with this exceptional £5 coin – commemorating the Centenary of the House of Windsor. In 1917 King George V changed the name of the British Royal Family from Saxe-Coburg and Gotha to the now familiar Windsor. The coin’s pleasingly traditional design features Windsor Castle. 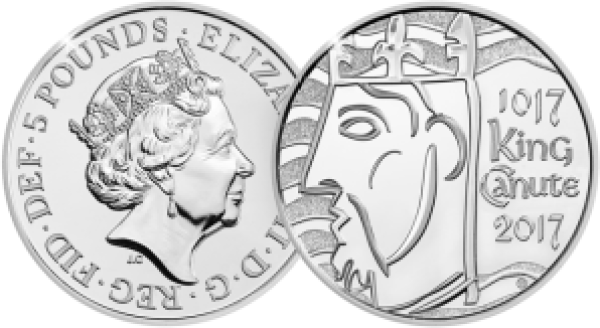 In a nod to Britain’s storied history, the second 2017 £5 coin marks the 1,000th anniversary of King Canute’s accession to the throne. Most famous for his attempts to prove his power by turning back the tide, Canute is also hailed as the first ‘king of all England.’

Some of these designs are really exceptional, and they are certain to become more sought-after in years to come. Which is your favourite? Let us know in the comments!

You can now own all the new 2017 coins in the DateStamp™ UK Specimen Year Set. Each coin has been struck to Brilliant Uncirculated quality and encapsulated alongside a 1st Class Stamp officially postmarked by Royal Mail with the issue date – 1/1/2017. Click here for more details…