The official new Poppy Coin has just been issued in support of The Royal British Legion, and this year it is especially poignant.

2016 is a milestone year as it marks the 100th anniversary of the Battle of the Somme, the First World War battle that has come to symbolise the awful tragedy of the conflict.

To pay respect to those who served, the new coin’s design has been inspired by the falling poppies at the annual Festival of Remembrance – held in the Royal Albert Hall.

I caught up with designer Matt Tindall to ask him about the design:

“As this is the only official Poppy coin issued in support of The Royal British Legion I wanted to make sure the design was instantly recognisable, yet also had a subtle reference to the importance of the year 2016.

“The wording “Lest We Forget” from Laurence Binyon’s Ode of Remembrance seemed particularly fitting – and the quotation is covered by 11 falling poppies which of course represent the 11th hour of the 11th day of the 11th month.

“My grandfather served during the First World War in the South Staffordshire Regiment so it was a real honour to be asked to design the Poppy Coin. The Royal British Legion has always had such an important role in this country and I only hope this coin goes some way to helping their work.”

A coin for everybody

A whole range of different coin specifications are to be struck, meaning there is a coin for every collection. From a special Proof quality cupro-nickel £5 coin – right up to an astonishing 5oz Gold edition, the new Poppy Coin is undoubtedly a moving  tribute for Remembrance Day in this historic year.

Officially issued in support of The Royal British Legion

To support the work of The Royal British Legion, The Westminster Collection have organised for a donation from the sale of each coin to go directly to the charity, helping them to continue to provide financial, social and emotional support to all who have served and are currently serving in the British Armed Forces and their families. 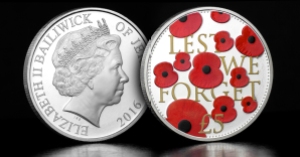 The 2016 “Lest We Forget” Proof £5 Poppy Coin is available now. Click here for more details and to add one to your collection today…

A donation from the sale of each coin will go directly to The Royal British Legion.