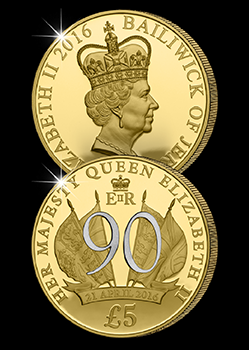 On 21st April, 2016, Her Majesty Queen Elizabeth II will celebrate her 90th birthday – the first British monarch ever to do so.

In honour of the occasion a new coin has been issued – featuring a specially commissioned one-year-only birthday portrait.

The coin has been officially approved by Her Majesty the Queen, and proudly displays the royal cypher atop a large “90”. The central design is flanked by the Royal Standard and Union Flags on either side.

But it is the new effigy that will fuel collector demand. Replacing the familiar standard portrait for one year only, renowned sculptor Luigi Badia was tasked with creating a special 90th Birthday engraving of the Queen. 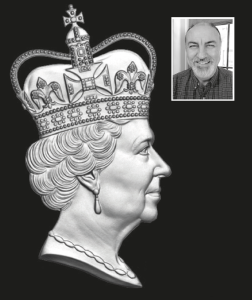 As you’ll appreciate, that is not a simple process, with an extremely rigorous approval procedure. To give you some idea, the Palace requested three separate revisions until they felt the effigy was perfect.

That’s why special portraits such as this are few and far between and are so popular with collectors.

Luigi, from New York, explains the concept behind the design:

“I was extremely honored to be commissioned to sculpt a brand new portrait to celebrate Her Majesty’s 90th birthday.  I was inspired to use the St Edward’s crown as it captures her sense of duty from when she first wore it during her Coronation in 1953, a sense of duty that she has had through-out her life and reign”

The design is intricately engraved onto the die

Careful consideration has to be put into the shape and size of the coin. Luigi painstakingly hand-engraved the design – with the added complication of retaining the typesetting within the circular shape.

The finalised ‘plaster’ engraving is then ready to be reduced down into a die (shown opposite) – which is hardened and used to mint the commemorative coins collectors can own.

Struck to a variety of specifications…

The new coin is to be struck in a range of different specifications, from a face value version right up to a staggering 10oz gold edition – which has already sold out.

And the other coins are likely to prove just as popular – with a highly collectable proof coin, a pure silver coin, and a 1/4oz gold coin amongst those available, there is something to suit everyone.

These coins really do make a fitting tribute to Her Majesty, and the stunning 90th birthday portrait marks them out as truly prestigious commemoratives to forever remember this once-in-a-lifetime celebration. 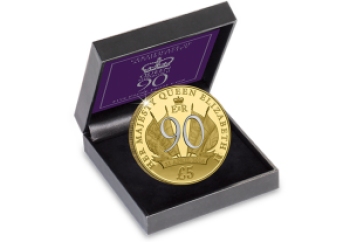 If you want to mark the occasion you can add a Queen Elizabeth II 90th Birthday Proof £5 Coin to your collection today.