The Westminster Collection has supported The Royal British Legion for many years raising over £700,000 for the charity to date. It is the exclusive retailer of the annual Poppy coin. Now you have the exciting opportunity to WIN the Masterpiece Silver 5oz 2017 Poppy Coin.

Simply answer the following question about The Masterpiece Silver 5oz 2017 Poppy Coin to be in with a chance of owning this magnificence piece of numismatic craftsmanship.

Competition entries received after 1st December will not be accepted. The winner will be notified no later than 8th December. See Terms and Conditions for details.

Question: By how many millimetres is the Poppy raised above the surface of the coin? (Clue – read about the coin below!)

Sorry – The competition is now closed.

Last year an important milestone was reached; over £500,000 was raised, through sales of Poppy coins, for The Royal British Legion. To mark this incredible milestone, 450 very special Masterpiece Poppy were released.

This year we have reached an incredible £700,000 raised in support of The Royal British Legion and are marking this new milestone with a new Masterpiece Poppy which is even more limited than last year’s issue.

With a strict edition limit of just 250 pieces the 2017 Masterpiece Coin almost twice as limited as the 2016 Masterpiece issue and today you could become one of just a handful of collectors to own one of these very special Poppy Coins.

The coin is called the “Masterpiece Poppy Coin”.  But let me explain why it is worthy of this title.

Not only has this year’s issue been struck to an incredibly high relief, it has also been painstakingly finished with glossy colour enamel to beautifully recreate the stylised poppy that is synonymous with The Royal British Legion. 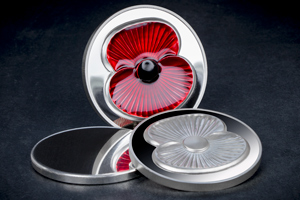 From blank to finished coin – striking the Masterpiece Poppy Coin

As I have mentioned the coin features a single Royal British Legion Poppy struck on a 5oz Silver Proof Coin.  But it has been struck with massive pressure and incredible skill 5 times to create an ultra-high relief.

The Poppy literally comes out of the coin, raised a full 1.6mm above the surface of the coin.

Remember this is NOT a cast piece.  It is a fully struck proof coin, which means it has all of the detail, mirroring and frosting that you expect from a commemorative proof coin but with the ultra-high relief of a casting.

Enamel is a stunning addition to this coin, and is particularly suited to depict the stunning poppy that adorns the reverse.  The colour enamel has been applied expertly by hand to enhance and highlight the superb details of the poppy and the central black button.

From Egyptian jewellery right through the ages enamel finishing has been the hallmark of quality and in this case defines perfectly the essence of the Masterpiece.

Presentation that befits your masterpiece

And, as befits such a masterpiece, its presentation matches the coin’s impressiveness.

The luxurious wooden display case allows you to display your Masterpiece Poppy Coin to the best advantage, with its glass lid protecting the coin. Inside the box is space for the numbered Certificate of Authenticity, as well as the accompanying booklet that tells the story of the Masterpiece Poppy Coin from concept to final coin.

Just 250 2017 Masterpiece Silver 5oz Poppy Coins will ever be struck and just by answering a simple question you could be the winner of number 1.