The Westminster Collection has supported The Royal British Legion for many years raising over £500,000 for the charity to date. It is the exclusive retailer of the annual Poppy coin. Now you have the exciting opportunity to win the first edition of The Masterpiece Silver 5oz 2016 Poppy Coin complete with Certificate of Authenticity hand-signed by the Legion’s Director General Charles Byrne.

Simply answer the following question about The Masterpiece Silver 5oz 2016 Poppy Coin to be in with a chance of owning this magnificence piece of numismatic craftsmanship.

Competition entries received after 2nd December will not be accepted. The winner will be notified no later than 9th December. See Terms and Conditions for details.

Question: How many times has the Masterpiece Silver 5oz 2016 Poppy Coin been struck to create the ultra-high relief finish? (Clue – read about the coin below!)

Sorry – The competition is now closed.

The Masterpiece coin features a single Royal British Legion Poppy struck on a 5oz Fine Silver Proof Coin. But it has been struck with massive pressure and incredible skill 5 times to create an ultra-high relief. 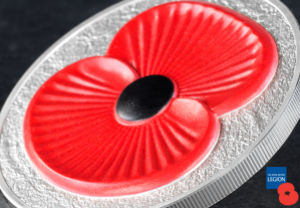 The Poppy literally comes out of the coin, raised a full 1.6mm above the surface of the coin.

This is NOT a cast piece. It is a fully struck proof coin, which means it has all of the detail, mirroring and frosting that you expect from a commemorative proof coin but with the ultra-high relief of a casting.

To complete the Masterpiece Coin, the Poppy has been expertly finished in poppy red with the black central button, exactly replicating the Poppy you and I wear with pride each year.

Presentation that befits your Masterpiece

And, as befits such a masterpiece, its presentation matches the coin’s impressiveness. 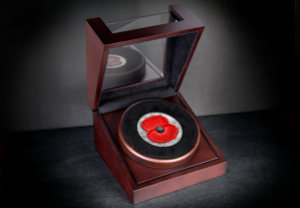 The luxurious wooden display case allows you to display your Masterpiece Poppy Coin to the best advantage, with its glass lid protecting the coin. Inside the box is space for your numbered Certificate of Authenticity hand-signed by Director General Charles Byrne, as well as the accompanying booklet that tells the story of the Masterpiece Poppy Coin from concept to final coin.

Just 450 2016 Masterpiece Silver 5oz Poppy Coins will ever be struck and just by answering a simple question you could be the winner of number 1.