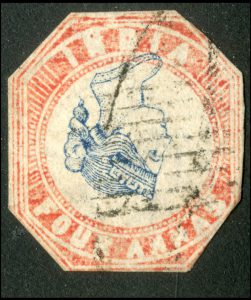 A rare 159-year-old stamp that has an image of the head of Queen Victoria on upside down after a printing mistake has emerged for sale with a whopping £70,000 estimate.

The postage stamp is said to be one of the most sought-after items in the world of philately.

During the first printing of the four annas stamp in the survey office in Calcutta in 1854, the Queen’s head was accidentally printed upside down on the stamp.

The mistake went unnoticed and dozens of the stamps were sold in India, which was the jewel in the crown of the British Empire at the time.

Auctioneers Spink of London has put an estimate of £70,000.