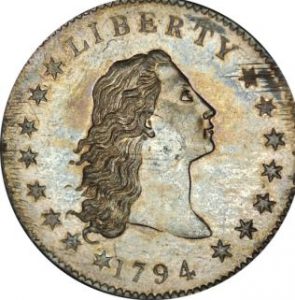 A Flowing Hair Silver Dollar, the first silver dollar struck by the United States Mint, is pictured in this undated handout photo obtained by Reuters January 24, 2013. The rare 1794 silver dollar sold for slightly more than $10 million at a New York auction January 24, more than doubling the previous $4.1 million record set in 1999. REUTERS/Stack’s Bowers Galleries/Handout (UNITED STATES – Tags: SOCIETY TPX IMAGES OF THE DAY BUSINESS) NO SALES. NO ARCHIVES. FOR EDITORIAL USE ONLY. NOT FOR SALE FOR MARKETING OR ADVERTISING CAMPAIGNS. THIS IMAGE HAS BEEN SUPPLIED BY A THIRD PARTY. IT IS DISTRIBUTED, EXACTLY AS RECEIVED BY REUTERS, AS A SERVICE TO CLIENTS